With effects, you can add dynamic effects to your graphic objects, as described in the previous chapter (see the difference between Animations and Effects)

Effects make the graphic visualization less static, and their function is similar to animations. However, they do not reflect the real state of a technological process.  We advise using the animations for visualization of a precious technology state and use the effects to visualize the real-time change of objects.

b. Select the object you want to set effects on and you can either click on effect icon in the top right corner toolbar or either you can click on “anims” and at the first place you can select effects 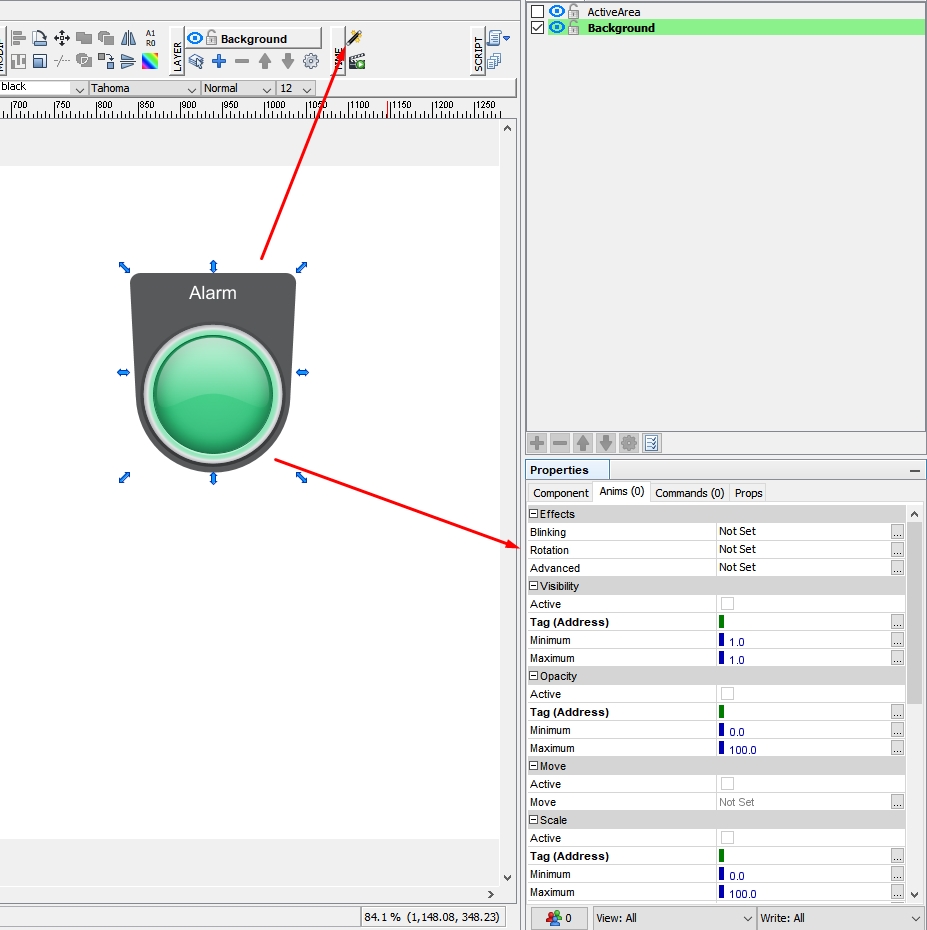 2. Now you have a several options what you can do, you can select out of 2 most used effects which are blinking and rotation these can be simply set by clicking on the one we want. On the screenshot we have set Modbus tag which will trigger rotation when the tag value is 0 or 1. 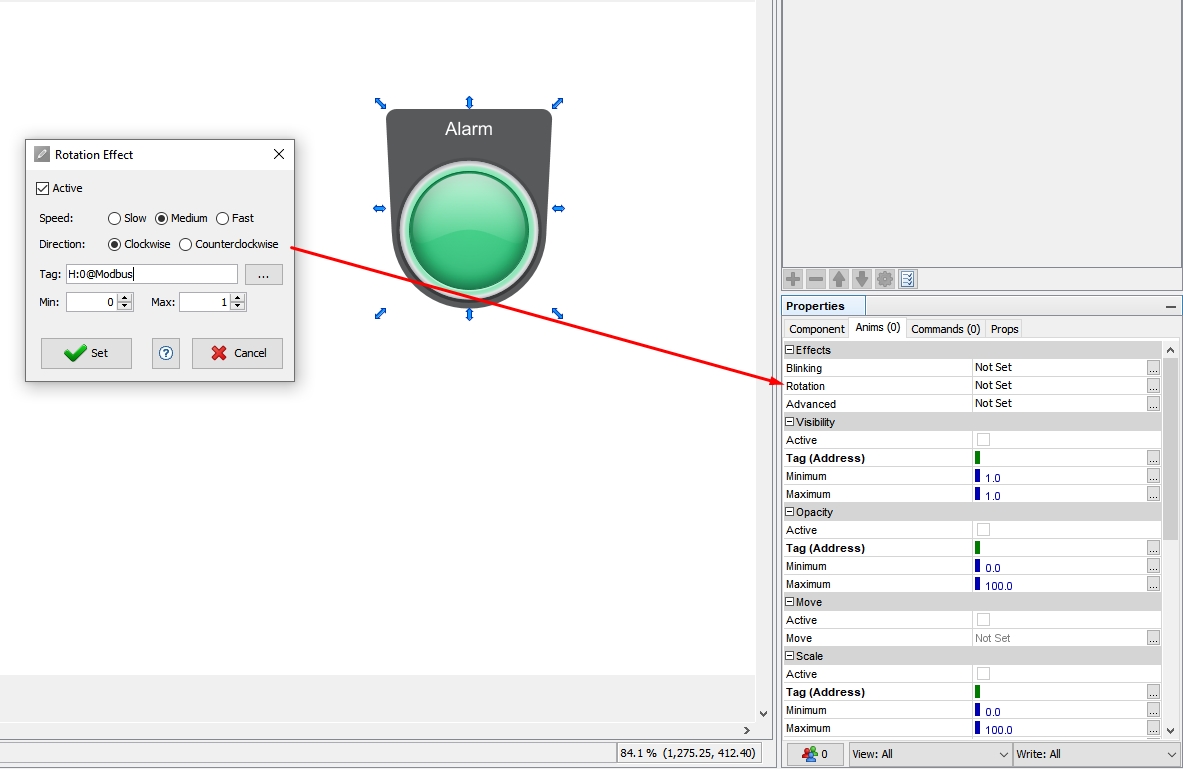 Same can be done with blinking effect if the value of tag H:0@modbus will be 0 or 1 component will start blinking at medium speed. 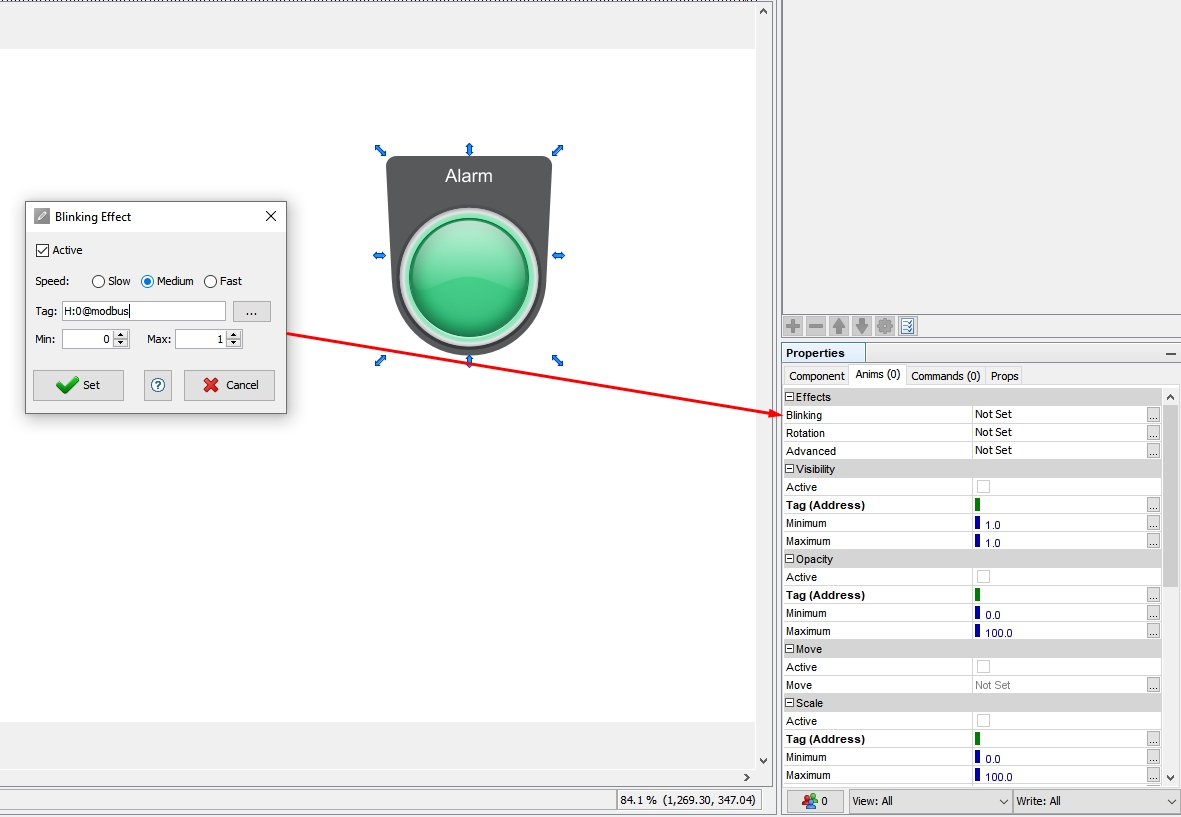 If none of these options won’t fit your needs you can simply click on advanced and make your own effect or select out of several more options which mySCADA offers to you. 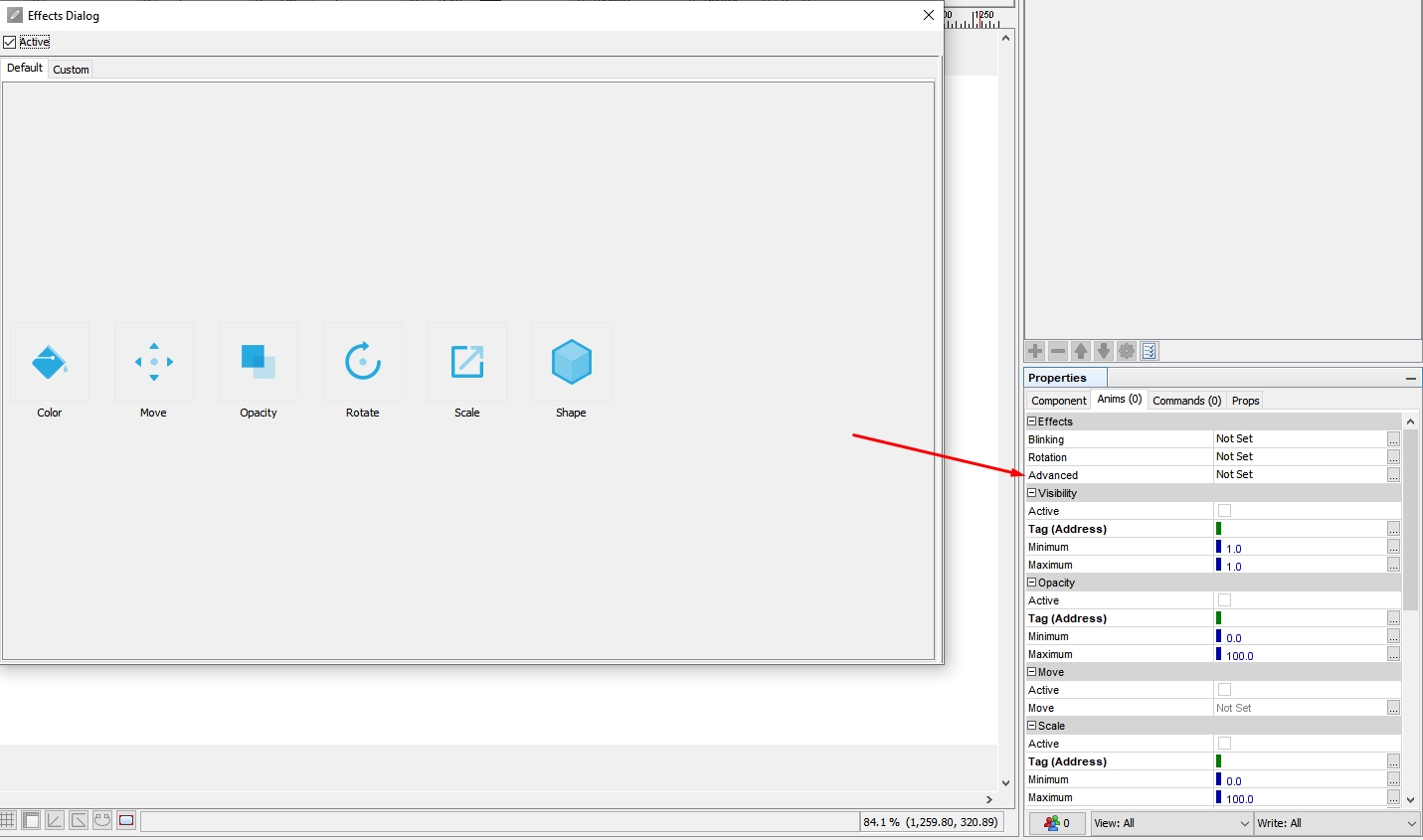 To select an effect, simply click on it. When you click on effect, it is highlighted and you are presented with effects’ properties on the right side of the effects window:

Timing – Duration specifies the duration of the effect itself, loops specifies how many loops will effect do (There is also forever option so as an example if the tag will trigger the effect, the effect will be active until tag value won’t trigger it).

You can even combine effects together and specify it’s easing. 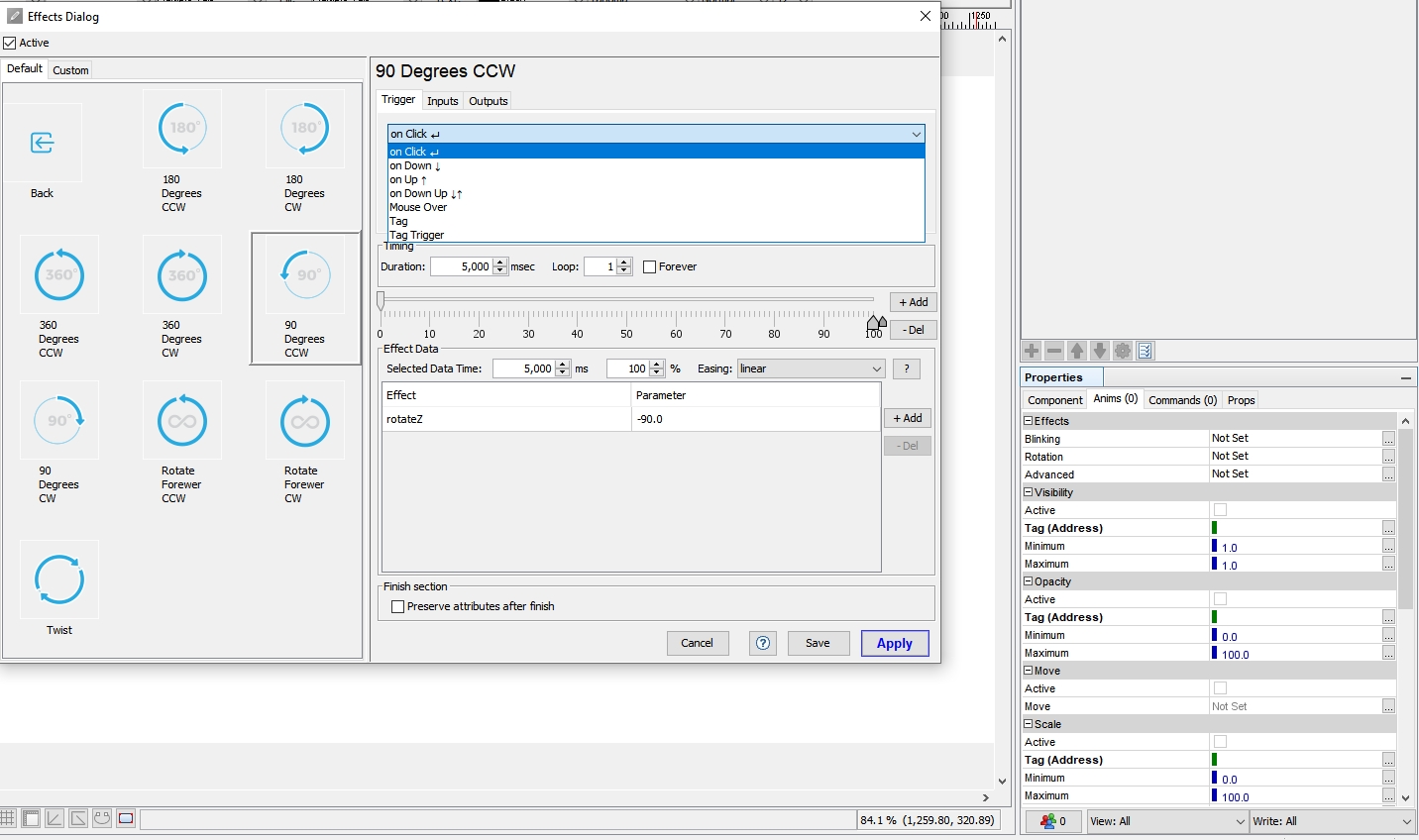 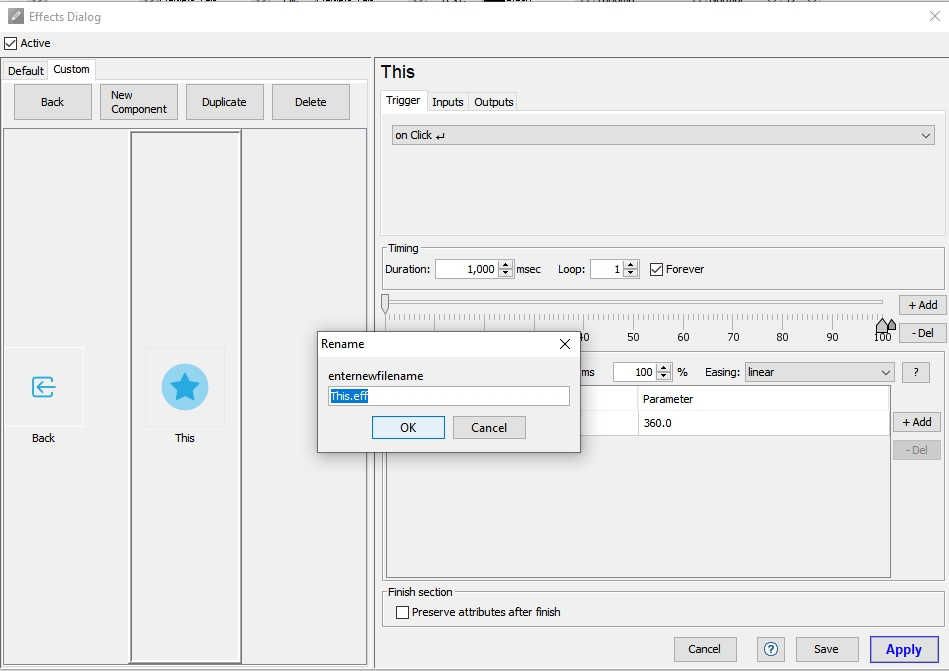 The mySCADA effects engine enables you to animate different properties for any element. You can change, for example, color, size, move element, and much more. The properties table shows you which properties will be modified when the effect is run.

This properties table has just one section and one property change. When this effect is run, it will change the element color to red. 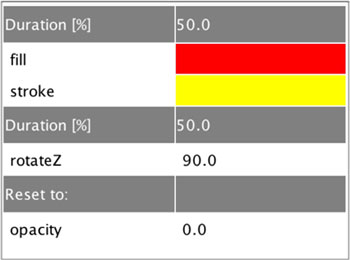 In this example, the fill and stroke color of output elements will be changed to red and yellow. The change will take time in first half of time (Specified by Duration 50.0 %). Then, the element will start to rotate and will rotate by 90 degrees. At the end of the effect, the element will disappear; this is due to the “Reset” section where we have specified opacity = 0.0.

To modify a property, double click on it. The Modify Property Dialog will be shown: 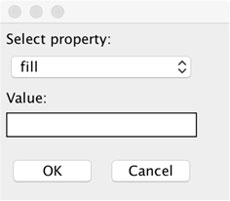 If you wish to modify a Time Section (Duration), double click on Duration label; a new Modify Duration Dialog will be shown: 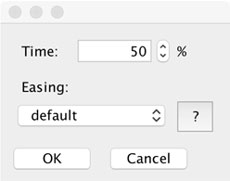 To add a new property or section, click on Add Button, and a new dialog will be shown: 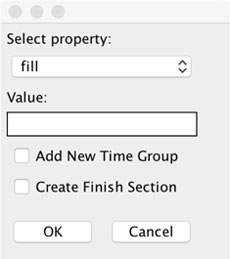 Select a property you would like to add and set its value.

If you would like to create a new Time Section (Duration), check “Add New Time Group,” and additional properties will be shown: 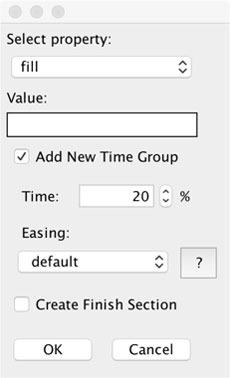 Fill in the required parameters:

If you would like to create a Finish Time Section, check the appropriate checkbox: 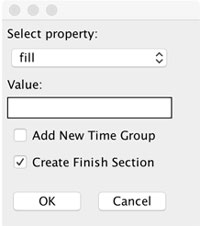 The Finish section is useful if you would like to set some properties for a given value at the animation end. If you use the Finish section, you should check “Preserve attributes after finish”.

A trigger specifies how an effect will be started. 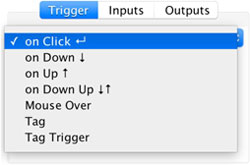 In the context menu, you can set the effect trigger:

on Click – effect will be activated when the object is clicked

on Down – effect will be activated when the object is pressed

Tag – effect will be activated when selected tag value reaches given range and stopped when the value is out of range.

Tag Trigger – effect will be activated when selected tag value reaches given range, but the effect will NOT be stopped when the value is out of range.

If you select Tag or Tag Trigger from the trigger menu, set the tag address and the range of the Min and Max values. 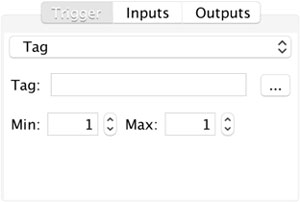 The Inputs section specifies the elements that trigger the effect action. If you, for example, set the action to on Click and then specify multiple Input elements, any of them will act as a trigger effect when a user clicks it. 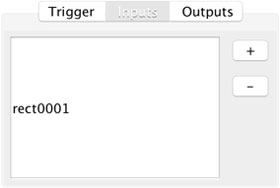 The “+” and “-” buttons allow you to add or remove Input elements from the list.

The Outputs section specifies the action elements to which the effect is applied. Usually, you want to apply an effect to the same element you have for the action trigger. In this case, you can leave  the default settings as “ThisElement.” If you want to have different or multiple elements, use the “+” and “-“ buttons to select the corresponding elements. 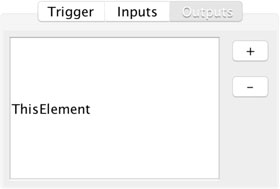 If you have modified effect properties and would like to save them for later use, press the “Save” button.

If you would like to set/apply an effect, press the “Apply” button.